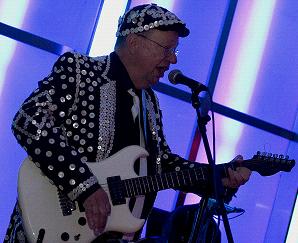 John has been leading the band since its formation 25 years ago. He comperes and appears in every show.

His early musical career was spent as the leading light of the group ‘Talisman’. He wrote all the groups songs including the much covered single ‘Stepping Stones’- this song reached No 8 in the Dutch charts. His back catalogue of songs published by Sony/ATV music are still recorded by European artistes and ‘Stepping Stones’ has recently been used in an international TV advert. The Decca/Argo albums ‘Primrose Dreams’ and ‘Stepping Stones’ can still be found on the web. His strong clear voice was used in those days mainly for the trademark harmonies – now he sings all types of songs including his famous ‘ditties’.

John looks after ‘business’ and it’s him you email or speak to on the phone if you make an enquiry. No middle men! He has resisted all pressures to use backing tracks, sequencers or enhancers. He says – “With us what you see is what you get – Real Music!” 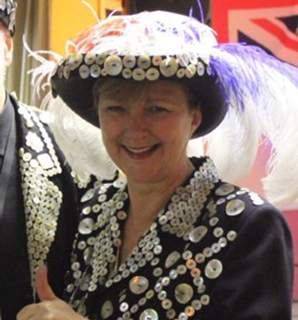 Everyone calls her Terri, even Joe Loss for whom she worked as the lead vocalist with his band for 3 years! Terri has a beautiful voice and sings all the standards. She has been singing professionally since she won a talent contest at a holiday camp when she was sixteen years old.

She has a wonderful rapport with the audience and entertains and talks to 4 year olds to 104 year olds with an equally engaging nature.